I was an only-child, so a cluster of first cousins was my longed-for siblings, my expanded family. I’ve just returned from a writers’ festival in a cousin-rich environment—Winnipeg, where my mother, aunts, and grandparents are buried—and where my surviving first cousins are still hanging in and their middle-aged children and their college-age grandchildren are thriving. I’m still the only part of my mother’s family to have been born, and to live, in the U.S. Of my father’s side, they’re nearly all in upper New England.

And so, I’ve been giving some thought to the attractions and oddities of cousinhood. First of all, cousins are part of us, but fully on their own. That’s a good basis for friendship. In fact, it’s unique. We’re not responsible for them; they’re not our siblings, children, parents or grandparents. They’re a little bit like us, but not really. Hospitable strangers, we might say. At most, we might share some traits, like a talent for drawing. We may have greater world-consciousness than most families; somehow, we all warmed to maps and atlases as children. We travel. Politically, we’re liberal. But cousins are only a fraction of us, a diminishing fraction with each new generation. Even with that little slice of shared DNA, we’d never recognize each other, we’d pass unnoticed on the street.

My cousins are generally healthy. Alzheimer’s runs like a late-blooming, toxic weed through my mother’s family; it’s something I fear for myself, as do many of my cousins. My mother, my grandfather, my great-grandfather, all died with it. One of my first cousins has it now. Genetic diseases entered my branch of the family from outside sources. (Hybrid hardiness is good for wheat, not necessarily humans). Our children are paying the price. There were twenty of us at dinner last week, ranging in age from 75 to 10, a clan, tending to a tribe. I added to the sum of family lore--did they know that one of our cousins was a two-time Olympic gold medalist? Did they know that another cousin’s ceramic work is represented in major museums on four continents? (Google Carolyn Waldo and Marilyn Levine). My host-cousin had gathered everyone’s photo albums (we’re album-keepers, one of our shared traits), and through one family’s photos we absorbed 120 years of western Canadian history. My baby-photos were tucked away in other cousins’ albums, doubtless to their confusion. Even my father, the long-forgotten “Uncle Leo” to the older generation, as alien to my mother’s family as could possibly be imagined in Canada at that time, made his dashing, boulevardier entrance, probably a “snap” taken my mother before they were married. But now, through marriage, French names, Ukrainian names, German names, are edging their way into our Scots-Irish and Flemish clan. My mother was banished for many years for daring to marry a French-Canadian.

And did I know my host-cousin is the CEO of three companies, which she founded? Or that her husband, a major lawyer and Mennonite choirmaster, had made the Julia Child boeuf bourguignon for twenty by getting up at five a.m. before going off to give a lecture to seventy-five lawyers.

Our extended family recycles names. Every generation seems to have its Annes, Ruths, Kays, Bens, Russells…although the youngest among us have gone a little exotic. Alexa? And they’re getting taller, and the women are better-looking than ever.

What I’m suggesting is that cousinhood is an invigorating exercise in building a social-media empire. Cousins are like the quasi-intimates on my FaceBook page; we’re aware of each other, we have joint attractions—there’s a reason we hang out together—in a nuanced, distant way, we love each other.
Posted by Clark Blaise at 4:40 PM 9 comments:

The Free-est Writer in America

An Ishmael Reed moment occurred a few weeks ago when a free-associating, mouth-running, retired Army Lt. Col. freshman Florida congressman Allen West, the only African-American Republican in Congress, the only Republican member of the Congressional Black Caucus, a Tea Party electee representing a majority-white district—“Boca”, home of Jerry Seinfeld’s parents’ iconic condo—nominated himself as ”the modern-day Harriet Tubman, to kind of lead on the underground railway away from that plantation [of Democrats] into a sense of sensibility.” (Whatever a sense of sensibility means: it doesn’t really matter). West is reckless and freelance, to borrow words from his apparently favorite author.

The point is, Ishmael Reed is not just a poet and novelist, playwright, provocateur, anthologizer, publisher and essayist, but both historian and prophet, and beyond all that, collagist, myth-maker, surrealist and iconoclast, and he has been all of them since the start of his career. And he is a man of a certain city, Oakland, which was once the free-est city in America, before the Bay Bridge, where the trans-continental railroad ended (and still does). Shit-kickers like Jack London and William Saroyan (the free-est writers of their respective eras) wrote of the rawness of the city, its unparalleled diversity, the whorehouses by the docks, the music, the cheap and endless seafood, a downscale Fisherman’s Wharf for the working class, where the clientele resembled something out of the end-of-the-universe cantina scenes in “Star Wars”.

When I call him the free-est writer in America, I mean really free: free from the constraints of time and space and what sane people call probability. Reed is an eavesdropper on history, a re-mixer of its soundtrack, much in the tradition, but not the style of Ralph Ellison. For Ish, (thinking of Flight to Canada) nothing is impossible. Watching Lincoln’s assassination live on TV? Sure. The fugitive slave, Raven Quickskill, wins a prize at The Squaw Valley Writers Conference. Why not? It’s about freedom, and Raven’s a freedom writer, his freedom is his writing, it will pay his ticket for an imagined Canada, and besides, Abe Lincoln and Walt Whitman loved it.

The African-American timeline is on a playback loop, propelled forward by promises (like Emancipation), and by the poem it ignites in his soul, allowing Raven Quickskill to peer into the promised future, and to live in his oppressive present, except for the fact that the imagination is forever unfettered. Ishmael Reed is an Oaklander; there’s no “then” there. Free of time and space, it reminds me again of the fact, as articulated in Invisible Man, that the black experience of America is a profoundly different narrative from the white, and vastly more expansive.  -Clark Blaise
Posted by Clark Blaise at 9:37 AM 1 comment:

About my new book of stories, The Meagre Tarmac 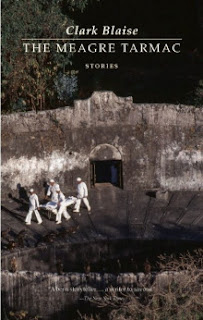 For the Indian immigrant characters in The Meagre Tarmac, material "success" in this country has been the easy part. After all, they were programmed to study hard, invest wisely, and live frugally. But that other Constitutional promise, "happiness," has been elusive. They were born and grew up in cultures that were warm and embracing but suspicious of personal initiative and prudish in matters sexual. Marriages were arranged between families with the hope (but not the promise) that love would eventually follow.

But this is the generation that came alone to America as graduate students, where, predictably, they learned and prospered, but—at least for my characters—love didn't follow. And so, these appealing men and women, so competent in so many areas, so esteemed, so charming, so poised, suffer from gaping holes in their souls. There's no training-school for dating, for wooing, for negotiating the snakes and ladders of courtship, for dealing with the demands and expectations of the native population of women (even America-born Indian women). Learning to expect—even to demand—personal and sexual happiness may seem natural to the America-born, but it's a steep climb for many Asia-born immigrants.

India has survived thousands of years by holding firm to its inherent value-system. But can a traditional culture stand up to liberal, individualist, secularism? This is a theoretical framing of the same question, and a fair-enough summary of the contents of this book.

That's the core conflict in this collection of linked stories. The Waldekars, Gangulys, da Cunhas, Chutneywalas, Nilingappas, Dasguptas, and their friends have earned earned everything they wanted but learned too late what they really needed. In India, as in most traditional cultures, family is everything, and roles within it are sharply defined. Remove any part, such as a child refusing a marriage arrangement, or a mother leaving the home and finding a job, or a husband abandoning his family and his responsibilities to it, and everything is torn down. I have been married to India (her name is Bharati Mukherjee) for 48 years, so I've been involved as husband, son-in-law, brother-in-law, uncle and cousin and friend to three generations of immigrants, Indo-Americans, and finally, just plain Americans who've finally negotiated the claims of duty to parents and culture, and the call of their inner child.
Posted by Clark Blaise at 12:23 PM No comments: